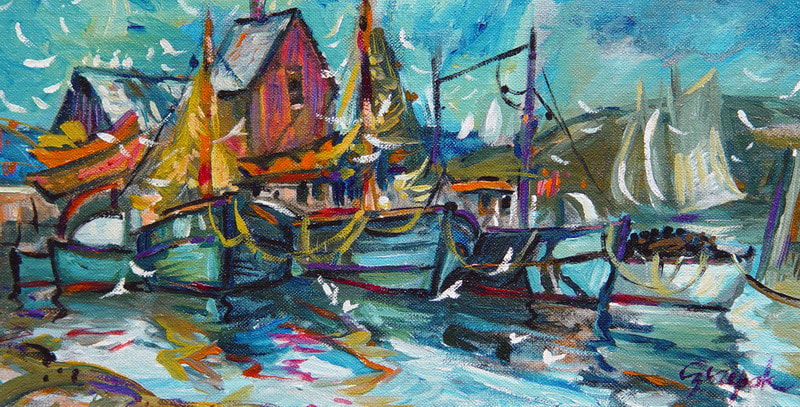 contact the gallery by
"Rockport Harbor"
Signed lower right.
Oil on board 8" x 14"​

Alfred Czerepak was a painter, sculptor, and teacher. He was the son of Polish immigrants. He studied art at the Vesper George School of Art and later at the Massachusetts School of Art. Later he traveled to study art in Florence, Italy and throughout Eastern Europe, the Mediterranean, and the Middle East. This experience influenced and expanded Czerepak's painting style.

Returning to the U.S., Czerepak came to the Cape Ann region of Massachusetts sometime during the 1950's. He became firmly rooted in the community, teaching at the Montserrat School of Art for 15 years. He painted and sculpted in many different styles, and became a sort of local icon as his studio was a haven for many artists and children.

Czerepak was a member of the North Shore Art Association, the Rockport Art Association, and the American Watercolor Society. In this painting, he depicts the iconic "Motif #1" red house surrounded by colorful fishing boats docked in Rockport Harbor. This comes in the original hand carved frame by the artist.