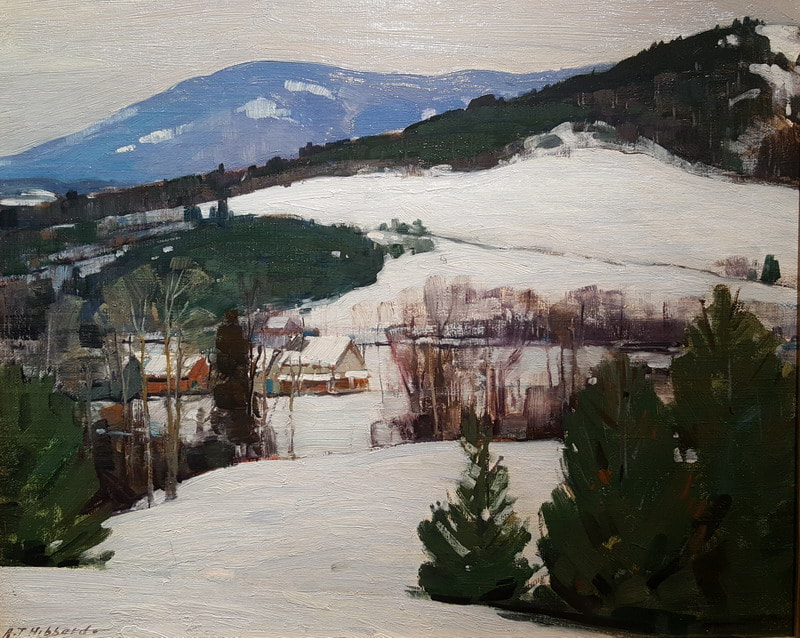 If you would like to SELL a painting by Aldro T. Hibbard
​contact the gallery by
"Winter Hillside"
Signed A. T. Hibbard, lower left.
Oil on canvasboard. 15" x 18"​

​​​​​​Aldro Hibbard was born in Falmouth, MA and died in Rockport, MA. Along with Anthony Thieme, he was an important founding member of the Rockport Art Association. Hibbard had the additional distinction of being a gifted baseball player who was asked to join professional teams. Instead he gave up sports to become a professional artist.

Hibbard studied art in Massachusetts with contemporaries Edmund Tarbell and Frank Benson. Because he showed great talent, he was given a traveling scholarship from the Boston Museum School to study abroad. Hibbard became a member of the Guild of Boston Artists, the National Academy of Design, the Conn.  Academy of Fine Arts, the Rockport AA, the Gloucester AA, and the Salmagundi Club, NY, to name a few.

He paintings were widely exhibited and his works were the recipient of many awards including gold medals at the Pennsylavania Academy of Fine Arts, the Hallgarten Prize at the National Academy of Design, and numerous awards at the Rockport Art Association.

Beginning in the 1920s, Hibbard summered in the Cape Ann, Massachusetts area and spent his winters in Vermont. Vermont was the locale of many impressionistic winter landscapes for which Hibbard is best known. In fact, he was so adept at painting snow scenes, a review in the Boston Globe for the 1918 Guild of Boston Artists exhibition noted:

"Hibbard is a realist; you feel the reality of everything he paints, but the sentiment, the poetry is there also. Others paint snow that looks like white paint streaked with blue and yellow. Hibbard paints snow that never looks like anything else but snow...he is...more subtle and more penetrating in his observation of delicate     nuances of gray, the phenomenon of light on snow."