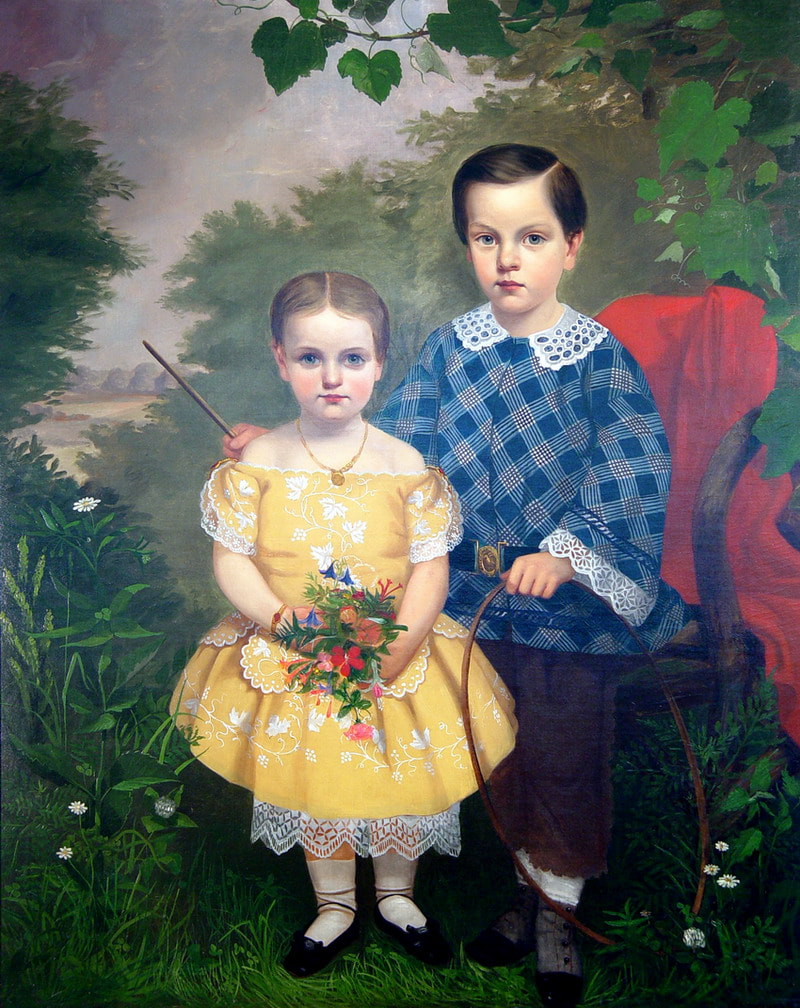 contact the gallery by
​"Double Portrait of a Young Girl Holding Flowers
and a Boy with a Hoop and Stick"
Oil on canvas. 50" x 40"

This painting is an extraordinary well done portrait of a young girl and boy together in a pastoral landscape surrounded by flowers amidst a grape arbor. The grape arbor is symbolic of the sitter's youth but also may speak to the virility of the United States as the country shifted from an agrarian to a powerful industrial economy. Note the exquisite dress and jewelry on the young girl, and the handsome plaid tunic on the young boy, the belt buckle a gold or brass eagle another symbol of the youth of our country.

Stylistically, this painting falls into the 1840-1870 period, right after primitive folk art was being produced but before professional academic portraiture began. Similar devices and nuances such as facial expressions are seen in many minitures painted by John Carlin. Smithsonian records do list a number of large scale double portraits by Carlin painted around this time. It was customary for many artists to not sign their commissioned works.

John Carlin began his art career very early as a youngster by drawing chalk pictures on the floor, much to frustration of his mother who would shoo him outside and mop the fascinating figures away. Nonetheless, he persisted, and his art profession eventually blossomed. He was a deaf-mute from infancy, and, after graduation at the Pennsylvania institute for the deaf and dumb in 1825, he studied drawing and portrait-painting first in Philadelphia and then in New York City. In 1838 he went to London, studying antiques and portrait painting in the National museum, and then to Paris, where he was a pupil of Delaroche. He returned to the United States
in 1841, and for many years made a specialty of painting miniatures on ivory. He later turned his attention to include to landscapes and genre pictures.

Carlin was smart enough to establish his business in the location of higher class Knickerbocker families of old New York, and, sure enough, those families became his patrons. Carlin was also a well known as a poet. He published some verses entitled The Deaf-Mutes'Lament in the Philadelphia Saturday Courier. He produced several other poems that were astonishing because during that time a deaf poet was unheard of. Carlin was married to Miss Seward of the family of President Abraham Lincoln's famous Secretary William Henry Seward. He died on April 23, 1891.