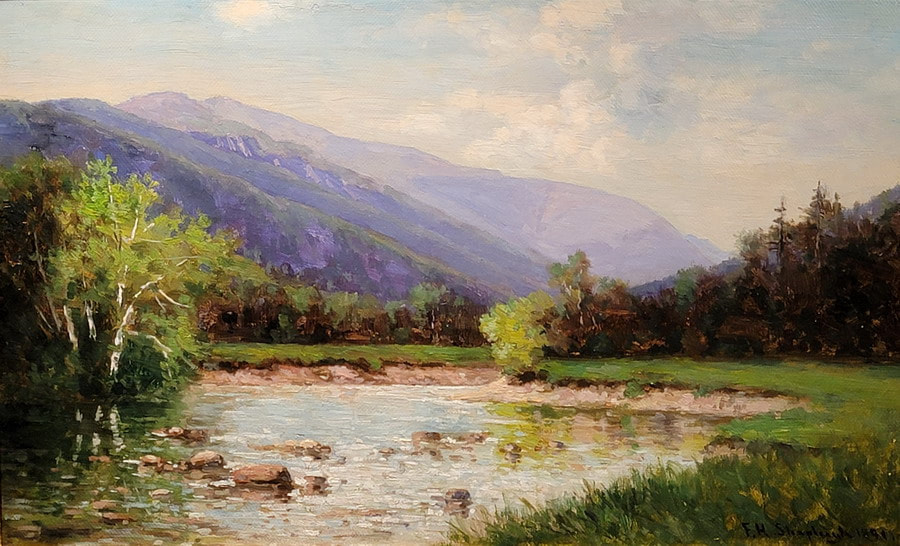 Frank Shapleigh is best known for his well-executed White Mountain, New Hampshire landscapes that include all of the major tourist attractions as well as places that had special, personal meaning for him. He painted Mount Washington and the other well-known mountains from dozens of different locations, and because he wrote the location of his paintings on the back of the canvases, his paintings provide an invaluable record of his works.

Frank H. Shapleigh was born in Boston in 1842. He maintained a Boston studio from 1866-1907 and wintered in St. Augustine, Florida after 1886. Shapleigh studied at the Lowell Institute Drawing School in Boston and in Paris. In 1876, he became a member of the Boston Art Club. Shapleigh also served in the Civil War from 1862 to 1863. After the war he began traveling, visiting the White Mountains in 1866, then California and Europe, where he studied in Paris with Emile Lambinet.

Returning to Boston, he married Mary Studley of Cohasset, MA. From 1877 to 1894, Shapleigh spent summers at the Crawford House, NH living in a cozy studio near the hotel, taking in pupils and painting mountain scenes to sell to tourists. He was very successful. A two-year trip to Europe ended his tenure at the Crawford House and he built a home in Jackson, NH.  From 1877 to 1894 he was artist-in-residence in St. Augustine, Florida, where he wintered at the Ponce de Leon Hotel.