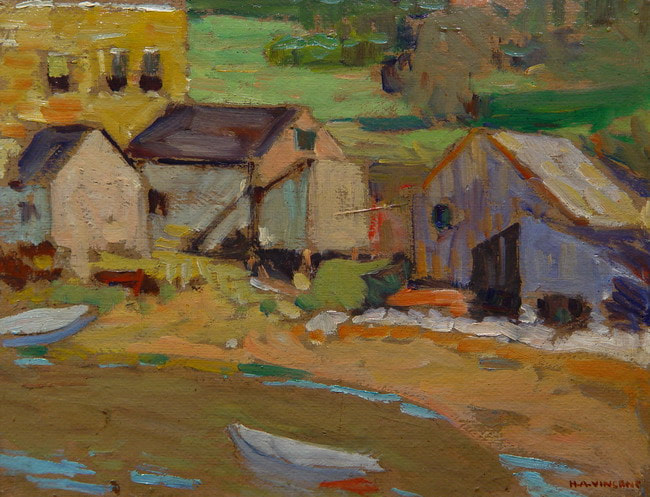 Born in Chicago, Illinois, Harry Vincent was a vital part of the Rockport, Massachusetts art colony,
serving as its first President and making it his home. He was self-taught with a penchant for bold
impressionistic marine and waterfront scenes, showing special interest in themes of the commonplace in
the working harbor---unloading fish, drying sails, etc.

However, little is known about his early life, and there is uncertainty about whether his birth date is 1862,
1864 or 1867, but most sources cite 1864. He was not affiliated with an art school, which accounts for some
of the confusion about these dates because many birth dates of artists are found in that type of entry
information.

His work was well-received in exhibitions at New York's National Academy and the Salmagundi Club in the
early 1900s, with most of them being marine paintings. In 1918, he first went to Rockport, where he
lived on the edge of Inner Harbor, the perfect spot to become familiar with Cape Ann fishermen. They often
took him out to sea where he could study the ocean closely.

This work was part of the recent exhibition "Harry Aiken Vincent and His Contemporaries" and is
included in the book under the same name. The exhibition was held in the fall of 2006 by the Rockport Art
Association, Rockport, Massachusetts.

Source:
North Shore Art Association
Peter Hastings Falk, Editor, Who Was Who in American Art
Judith A. Curtis, Harry A. Vincent and His Contemporaries