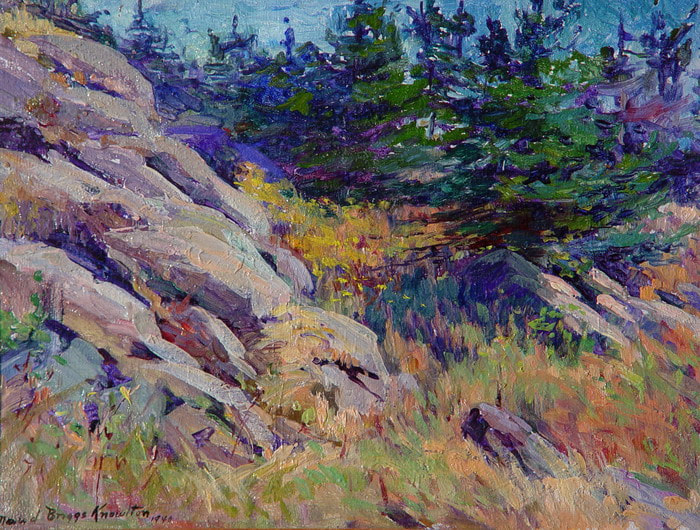 contact the gallery by
​"The Spruce Grove"
Signed lower left, Maud Knowlton.
Oil on board. 10" x 14"

​​Maud Knowlton was a dynamic ground-breaker. She and her friend Alice Swett were the first two women artists in the famous Monhegan Island (Maine) artist's colony. They painted at the turn of the 20th century on this island twelve miles off the coast of Maine, no easy journey, along with a dozen or so other hardy artist souls like William Trost Richards, Alfred Bricher and Eric Hudson.

Knowlton was a well-known Manchester, New Hampshire artist and educator. She was a highly-respected teacher at the Manchester Institute of Art. She was also one of the very first female museum administrators in the United States. She was appointed to be the director of the Currier Gallery of Art, in Manchester New Hampshire, in 1929 and served in that position until 1946. As the museum's first director she is crediting with laying a strong foundation for the institution (which is alive and well today with the new name of the Currier Museum of Art.)

Known for her excellent instincts and strong work ethic, Knowlton is known to have famously said, "One good canvas is worth a whole gallery of undistinguished paintings." She exhibited at the New York Watercolor Club, the Boston Art Club, the Manchester Institute of Art, and the New Hampshire Society of Art. She was also President of the Manchester Inst. of Art for a time. She was a member of the American Association of Museums, the Society of New Hampshire Art, and the NH Assoc. of Arts and Crafts.