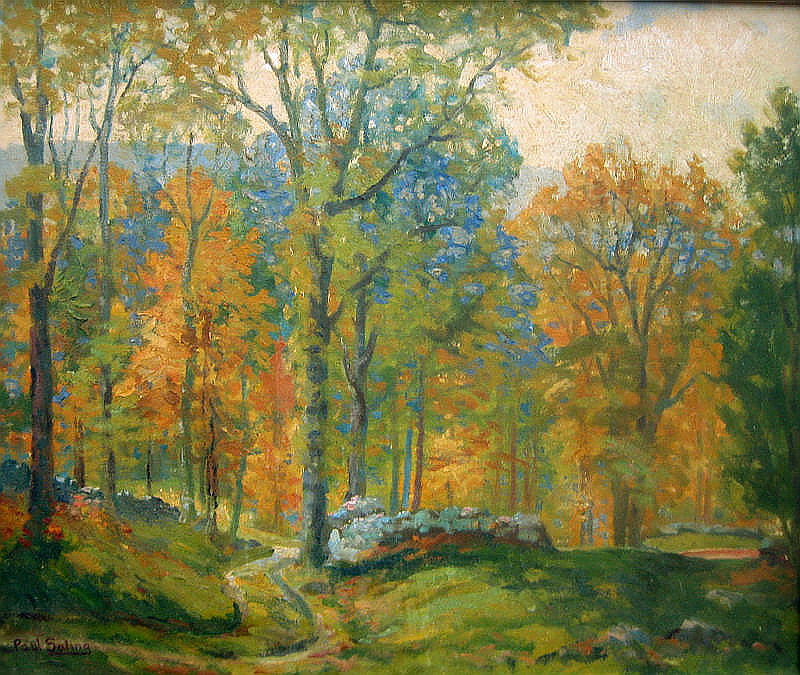 contact the gallery by
"Autumn Landscape",
Signed lower left.
Oil on board. 20" x 24"

Paul E. Saling was born in Magdeburg, Germany on July 19, 1876, and came to America in 1893 through Ellis Island in New York City. Saling had studied art in Germany at the Art School at Magdeburg and the Academy at Dusseldorf.  In America, he studied under Charles Noel Flagg in Hartford, Connecticut; and William Gedney Bunce, as well as at the Connecticut League of Art Students. Paul Saling, sometime after 1926, made his permanent home in Lyme, Connecticut.  His relocation coincided with a parade of new exhibitions and awards that validated his talent.

Saling exhibited at the Pennsylvania Academy of Fine Arts and the National Academy of Design in 1924 and 1926, the Society of Independent Artists, and at the Lyme Art Association repeatedly from 1925 through 1932. In addition,the Connecticut Academy conferred prizes to Saling in 1934 and 1935.

Credit:    Falk; Who Was Who in American Art