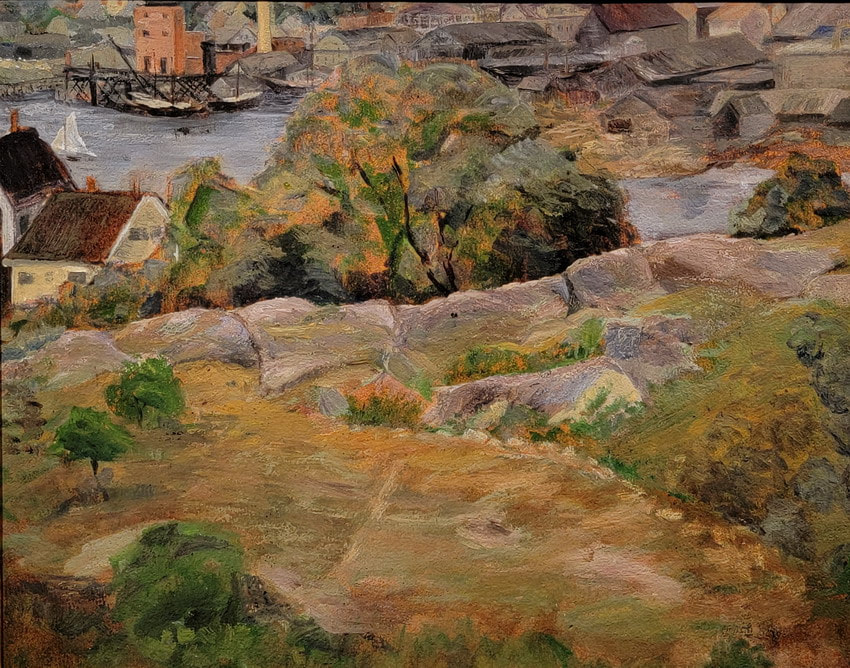 A vivid and arresting composition with modernist influences.

Noted for her strong compositions and particular skill with colors, Rose Kuper used many media, ranging from oil paintings, watercolors, etchings, lithographs, collages, monoprints, crayon impressions, ink and others. Her style ranged from realist in the beginning through abstract impressionism. Her most original contribution has been the use of printers' ink on the reverse of glass, culminating in a solo show at the Corning Museum of Glass, New York.

Born October 9, 1888, in Riga Latvia, Rose Kuper moved at the age of six months with her family to London, where she lived until the age of 5, when they came to New York City. She became primarily a New York City artist, belonged to the Manhattan Group, although she also did much painting in Gloucester, Massachusetts. She was active with the Brooklyn Art Association, the Art Students League and the National Association of Women Artists, which she served on the Executive Board from 1951 to 1954. She was also an instructor in the New York public schools and was married to Theodore Kuper.

In New York, she earned a B.A. Degree at Hunter College and studied with Abstract Expressionists Hans Hoffmann and Abraham Rattner. Her first teacher was Teresa Bernstein, with whom she studied in the 1920’s. Kuper began as an independent artist with a painting trip to Brittany in 1930, and ended with a retrospective show at the Whittier Museum in October, 1984. In between, she gained representation in the permanent collections of seventeen public institutions: colleges, museums and libraries, and had 18 one-artist exhibitions.